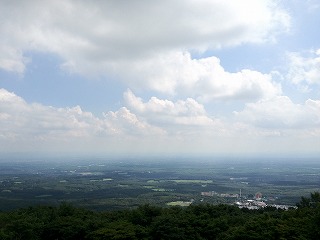 Hello everybody! How was your Obon holiday? Mine was great! I went to Nasu, Tochigi-prefecture.It was all decided pretty quickly, we made the reservations around 9pm the night before going there, but everything worked out fine.We stayed at a lovely B&B kind of in the middle of the forest.It was run by a shy but extremely friendly and helpful couple in their late 30’s or maybe early 40’s.They had three goats in the backyard and two big black cats that were running around all over the place. The best thing with Nasu was the climate. It was so comfortable. Although it was raining heavily a lot of the time it wasn’t very humid at all.The temperature was around 25 degrees most of the time. It felt like a nice Swedish summer! I have to warn you though.If you go there, bring plenty of insect repellant.The usual kind for misquitos, and a special one for gnats might be a good idea to bring too. It might be too late for most of you to go this season, but I bet Nasu is beautiful in the fall too. Or why not go there during your Obon holiday next year? 仙台インストラクター アクセル