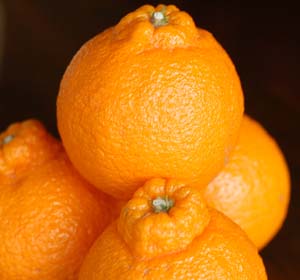 Have you heard fruit called sumo? Well, probably not, I suppose. However, I bet you have eaten a sumo before. Sure you have. If you are thinking about a gigantic fruit, something bigger than a watermelon, something so big that you can’t even imagine, well, it is not that big. Neither that, nor it will not give those who consume it the enormous physical power a sumo wrestler posesses. It is not sold at Kokugikan in Tokyo. Did I puzzle you enough? All right, it is about time I tell you what it is. It is a king of citrus fruit, or according to some people, simply the best tasting fruit in the world. It is being marketed under the name sumo in US, but it has been marketed under the name dekopon in Japan. A handful of California growers were growing dekopon trees, and this whole thing had been hush-hushed for a while. When asked by a fruit researcher, a sumo grower (n to be confused with oyakata) responded she knew nothing about such fruit. Now, sumo is on the market. What? I need to tell you why the secret? Well, unfortunately, there is not enough space here, and you need to google it yourself. Recently, sumo or dekopon was featured in Splendid Table of NPR. That is how I came to know about this. Go check it out!仙台校インストラクター ERIKO