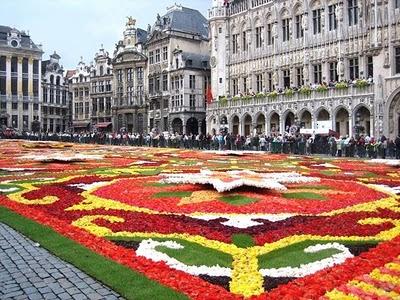 A couple of weeks ago I went back to Belgium with my husband and his parents. My mother had been very worried about the news reports on Fukushima and asked us to stay at the house in Brussels. It was my parents-in-law first time outside Japan. I was worried that the journey would be too long and exhausting for them, but they were excited to see the inside of an international airport for the first time, and eager to look around the huge airplane. When we arrived in Belgium, we stayed at my parents’ place, so we were six people in total. My parents don’t speak Japanese, and my grandparents don’t speak English. Despite this, they got on very well. We went sight-seeing around Brussels and his parents had a Belgian waffle with strawberries and chocolate on top. Although they were interested in European architecture and enjoyed sight-seeing, I realized that the happiest and most precious moments were the unexpected ones. For example, all six of us ended up spending the afternoon on the roof balcony of my parents’ apartment, eating sandwiches, drinking tea and napping in the sun. Although it wasn’t planned, that was the best part of this trip.I’m very happy to be back in Japan now, but at the same time it was great to have shown my parents-in-law the country I came from. 銀座校 インストラクター CATTY