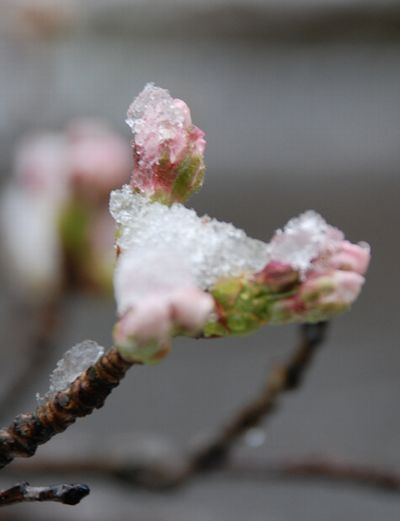 I woke up on Monday cold and shivering in my home in Kaihin Makuhari. I turned the heating on and hid under the duvet waiting for the apartment to warm up. It was raining hard outside too. “Great!” I thought. “I’ll have to cycle to the train station and go to Ebisu for my Japanese lesson in the rain and cold. On my day off. Nice.”. I fell asleep again. When I woke, the rain had stopped. It was snowing heavily instead, huge snowflakes were quickly covering the ground. I looked out the window and saw a man cycling with one hand on the bars, the other holding an umbrella. I would have to do the same unless… “That won’t be me,” I decided and called to cancel my lesson. I was so tired I spoke in English on the phone, even though the receptionist was kindly encouraging me to speak in Japanese. Instead of going to the language school, I went to all-you-can-eat buffet at a nearby hotel. I ate far too much. I then fell asleep in the shopping mall. At home I watched TV and fell asleep again. It was a great day off! 銀座インストラクター／CATTY